I have just got an email regarding a minor graphics bug occurring in two
simulators, sharing the same source code. I promptly fixed the bug and I am
now releasing the new archives. Thanks to Graham Gott for the precious
bug-report.
Here is the list of the new files:

They are available for download at the usual downloads page.

keep Up the good work

Bug-fixes time again. This time it was an easy and quick one for the
Nintendo Parachute game. Luckily the bug occurred in very rare occasions,
and for this reason it was quite hard to identify. Thanks to D. Yen for the
precious bug-report.
Here is the list of the new files:

The new files are available for download at the usual downloads page.
URL: http://www.madrigaldesign.it/sim/
Click to expand...

I made it. It took ten long years for me to upgrade all my handheld
simulators to the most recent "Standard 4". This process started with the
release of Mickey Mouse Panorama Screen in October 2007 and step by step the
new features were added to all 59 games.

Today I am releasing an updated version of the last game which had been in
my "to do" list for years. It is a very beautiful and well-designed game
featuring intriguing "artificial intelligence" routines making the game vs
CPU particularly challenging.

As usual, the new version features brilliant and larger graphics, improved
sounds, tons of fixes and - for the first time in my simulators collection -
a brand new key configurator control panel allowing players to redefine all
game buttons by assigning any key on the keyboard (this comes very handy for
the users of arcade cabinets and game launchers).

Please find attached the usual comparison between the new and old versions
of the game - I really do hope you appreciate the improvements!

Grab them from the popular downloads page.

To be honest, I have not yet made a decision about my next step in this huge
simulation project. I have been coding simulators for almost 18 years now
and, despite still enjoying doing that a lot, I do not have much spare time
to devote myself into programming new games.

I think I may firstly upgrade all my other simulators by adding all the new
features such as the removeable splash screen and key configurator control
panels. Or maybe I end up deciding to code a new game simulator... we'll
see. I will keep you posted, as usual.

In the interim, enjoy the new release! 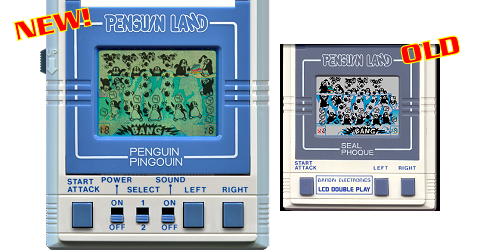 During the past five months, I upgraded all of my games (59) by adding numerous features that had been requested by many users over the years. I have always wanted to add those features but never really found the time and the willingness to commit myself in such an extensive "makeover" of my games.

But then in the end, I made my decision and added the following new features to all games:

The games have been tested over the past months by users of the wonderful Hyperspin community, under a "private beta testing" scheme. Now the time has come for the OPEN BETA phase!

Over the next 30 days (that is, until 16th November 2017) you will be given the opportunity to download and try the beta versions of all games. After this period, all games will be fixed, tweaked, updated and lastly released as "final versions".

Simply head to the usual downloads page and download the complete games package (CD Collection Beta) or the 59 standalone games (beta versions). Then send me an email with your bug reports, comments, or requests for changes before the deadline - being 16th November 2017.

I look forward to receiving your comments!

Please be informed that, as soon as the final versions of the games are released (by say mid December 2017), the new games will also be made available for RetroArch - thanks to the work of incredibly talented Brazillian programmer Andre Leiradella. RetroArch is part of the LibRetro project and works on Android, Apple, Windows, PS3, PSVita, Wii, WiiU, 3DS and many more popular platforms.

Following the release of the Retroarch versions, my new friend HCF-Retrocoder will also publish the new games under this MADrigalX andMADrigalPSP that allow the games to run on Xbox and Sony PSP!

And hopefully, Kyland Kainbryce (author of the porting to NES Mini) will have some time to also upgrade his package with the new games!

Then a new surprise game will be released on Christmas, so stay tuned!

All files available for download at the usual downloads page.

What better way to celebrate than playing your favourite classic videogames
under the Christmas tree? And when they are completely free, the games play
even better!

As announced a few weeks ago, I am today releasing my very own
re-interpretation of Nintendo's most iconic pocket game: Donkey Kong Multi
Screen.

This "Special Edition" application simulates the gameplay of the old classic
Game & Watch with a few minor changes. Even though the gameplay is almost
the same, the graphics and audio experience is quite much improved:
everything has been re-designed from scratch!

The game features four stages, each with custom-made images and sounds
effects. Tweaking the included "config.ini" files, you have the power to
create and add your own images, remove any of the existing, change the order
of the stages, make the game play your own sound effects, or... whatever you
have in mind!

The included stages are listed below:

1. "Sunset City" features black LCD graphics on a black skyscraper on a
cityscape background. The graphics is an adaptation of the beautiful DK
Wallpaper designed by Old Game Box a few months ago.

2. "Panorama Screen" is inspired by the beloved colourful electronic
games of the same series, released by Nintendo in 1983-1986. The graphics
feature coloured sprites on a black background and show how the game would
have looked if it was released as a Panorama Screen game.

4. "Classic G&W" is the real pocket game displayed very realistically,
to provide the real experience of having the game on your crowded desk. It
utilises the photo of a real Game & watch as pictured by my long time friend
Roberto Mayrhofer.

The attached image shows two of the four settings and one intermission
screen, shot at 1366x768. Note the game requires screen resolution of
1024x768 as a minimum, however the bigger the screen, the better! Best
results are obtained on 1920x1200 desktops. 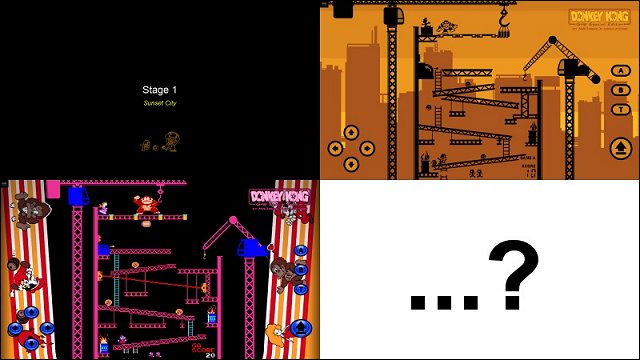 The files are available for free download from the usual downloads page.

I wish to express my gratitude to Old Game Box and Roberto Mayrhofer for
providing portions of the game graphics, and Mike DX and Paul Rahme for
providing a few sound effects. This game could not be the same without your
help! 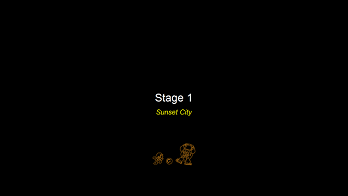 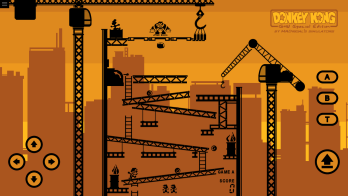 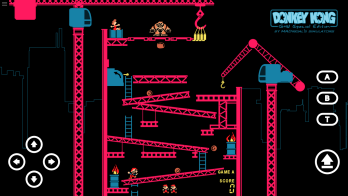 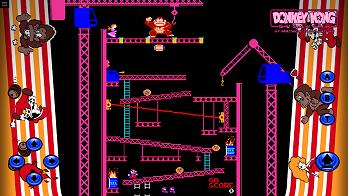 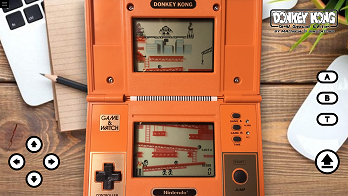